skip to main | skip to sidebar

Walking along the Freedom Trail (Updated)

This post has been sitting in my drafts for about a year now. I can't believe I forgot to post it! Nonetheless, walking the Freedom Trail in the wintertime doesn't get old to me.

It's not too cold to walk the Freedom Trail. Only in the wintertime can we experience the true colors of Boston, its smell, its touch. It's not just about the historical sights, it's about seeing the city as a whole from a different perspective: how its rich history plays a role in our every day life, combining the past and present. Its natural beauty harmonizes with the modern architecture. Don't be afraid of the weather; the crisp, cold breezes are very inviting. All you have to do is follow the red brick line (which may sometimes turn into a painted line along the pavement) so you will never be lost. Why wait for spring when you can do it now?
Posted by Lynn Marie Franco at 11:00 PM No comments:

It's not too cold to walk the Freedom Trail. Give it a try!

Posted by Lynn Marie Franco at 12:59 AM No comments:

Personality tests are quite generic, but this one is pretty accurate.

These are my results:
http://e-mbti.com/esfj.php
http://typelogic.com/esfj.html
(I do not agree with the cartoons they selected, though)

Find out what you are!
http://humanmetrics.com/cgi-win/JTypes1.htm
Posted by Lynn Marie Franco at 11:12 PM No comments: 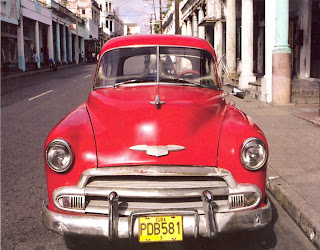 American Classic Car Pina del Rio, Cuba. Photo by Daryl DeLuca.
I loved when Obama signed that bill closing the prison at Guantanamo Bay during his first week in office. He said this was one of his priorities while he was on the campaign trail, and it looks like it's finally going to happen. But what's next?
I attended a lecture about Cuba Thursday evening at the School of Management. I knew Daryl DeLuca was going to participate, so I went. (I had been to one of his previous lectures about Cuba at the Howard Thurman Center last semester, and I became a fan of his photographs and his insight.)
I heard Sociology Professor Susan Eckstein speak about the different groups of Cuban immigrants and how their political ideologies differ. I must say, I will probably buy her book when it comes out in May.
Basically, there are two main groups of Cuban immigrants living in Miami:
The first is the group of exiles that left when Fidel Castro rose into power. Today they are very rich and have political power, but support the embargo as a way to punish Castro. They refuse to visit their families who stayed in Cuba or send them money, because they believe that would be contributing to Castro's regime.
Then there are the new Cubans who fled illegally to the United States. They are humble people with no American citizenship or right to vote. However, they come to America to share the little money they make and send it to their families. They visit as often as they can and bring them goods, like Nike shoes and iPods. They wish the United States loosened the embargo, so things could be easier for them.
The new Cubans have a subsection of Cuban Americans composed of their kids, born and raised in the United States. Though they have never lived in Cuba, they worry about their country of origin. These tend to be a little in between the two main groups, explained Eckstein.
With the numerous amount of Cubans living in Florida, the largest swing state, you'd think that it would be easy to determine the new Cuban-American policy. Not so easy. Although they have the same background, they do not share the same political ideals. If there is no consensus among themselves, then how are our political leaders going to guess what it is that they really want?
Assistant Dean Daryl DeLuca, who has traveled to Cuba many times, said someone once told him Cubans tend to change their mind a lot, and they don't agree on many issues.
"If you have five Cubans, you have six different opinions."
That was a joke, obviously. Funny one.
So I agree with Professor Eckstein: It is too hard to predict the future because nationalism comes in the way, and then the United States gets blamed for interfering with Cuba's internal affairs, etc.
So what will Obama do next in regard to Cuba? I guess it's not up to the Cuban immigrants if they cannot agree among themselves. People achieve things by coming together.
I understand why they think so differently. Frankly, both groups are quite right in what they believe. But there has to be a way to reconcile those views, for the good of their own country. We cannot count on Fidel and Raul dying soon. We don't know that they will die soon. We don't even know anything will change after they die.
Posted by Lynn Marie Franco at 1:54 AM 1 comment:

My Trip to India Map!

I have a lot of Indian friends in college, so I went to visit them the summer after my freshman year. Here is a map of all the wonderful places I saw. Click on the blue pointers to see pictures and captions.